The 3 Most Common Scams You Should Know

Here are a few examples of the most common scams targeting foreign buyers. 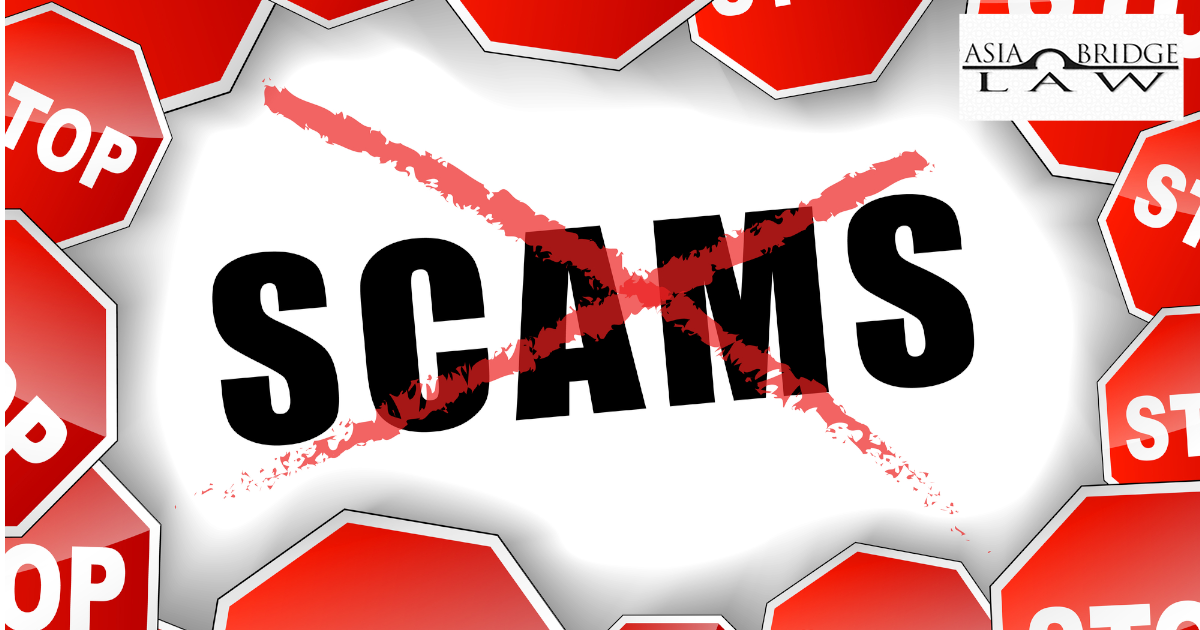 This is where the scam artist convinces the buyer to send as much up front money as possible.   They victim is thinking,  “I want to be smart.  The product is $1,000, I’m going to only give a $500 deposit to keep them honest, and I'm not paying that $500, second payment, until the product is delivered.”  But the scam artist was never planning to ship you anything.  They don’t even make a product; they don’t have a real company.  They take your deposit and just delete you from their contact list and ignore your e-mails.  So that’s "the classic" because it happens all the time.  You send some money, 10% deposit, 50% deposit, if you’re crazy 100% deposit, and then they just ignore you.  That’s classic.

The second most common scam is “It’s on the way” scam, where the buyer think they are being smart by saying:

“Alright, I’m not going to pay you, Mr. supplier, until you show me proof of shipment.”

Maybe you ask to see the B/L (bill of lading) or other "official documents" proving the shipment has taken place.

I’ve seen scam artists ship a box of rocks in order to give a B/L to the victim.  The paperwork is real, the order is not!

They may even bride somebody at the logistics company or customs office to write on the official documentation that this is a box of electronics, when in reality it's a box of rocks.   You’re sitting there thinking, "I'm so smart, China sourcing is easy, my product is on the boat and the hard part is over so it's safe to pay the next payment to the seller".   By the time the box of rocks arrives, it's too late.

The worst case of "it's on the way" that I’ve personally witnessed, involved  was a French woman working out of Dubai.  She was really excited about the smartphone order that she placed because she was expecting to make a huge margin.  She knew that she wanted clones of something that looked like the Apple iPhone.  This was a big order for around 200,000 Euros.  Upon seeing the shipping documents she paid 100K.  20 days later when the container load arrived, she was horrified to learn the scam artists shipped a bunch of broken cell phones.  So the shipping document says here are a couple of pallets worth of cell phones coming, and she paid the money.  Later she found out that they were all junk, they were broken, missing batteries, cracked screens.

Now let’s talk about “Milking the cow”.  This is where you maybe give a small deposit to the scam artist, thinking you want to be safe.  And the scam artist comes up with every excuse why you need to pay just a little bit more money to get things moving:

“Oh, you wanted a battery installed in those electronics. That's gonna cost a little bit more.  Just a few dollars. No big deal. Sorry for the confusion.”

“Oh, you want those units packaged?  I didn’t realize you wanted each one wrapped individually. No problem, it will just add 2% to the total. We will do all we can to keep costs down if you pay for the packaging materials."

And the most common one is

“I thought you were handling the import/export.  We have to pay a special $400 duty to have this product clear outbound customs from China.”

Totally fake excuse. Maybe the order doesn’t even exist, but because you’ve already given a deposit for maybe $2,000 you may think “Alright, 50 more dollars here for battery, $400 dollars there to get the customs clearance. No big deal because I'll not have to pay the balance until the goods arrive in my warehouse. ”   But at some point you will realize that they have been tricking you all along, and there is no product to ship, it’s a scam.

Now that you know about the same, be sure to avoid:

In an upcoming blog post I would like to tell you about two advanced scams that have become somewhat common in the last year or two.  They are nasty and easy to fall into.

Related posts to ... Huge Red Flag that a Website is a Scam Artist

How to find and verify a supplier in China

When Do China Suppliers Go On Holiday for the Chinese New Year?